This part was written by Sander Lourens and Ron Meijerhof (Poultry Performance Plus). Title was "Yolk as the fuel for embryo metabolism".

During incubation, yolk and albumen from the egg content are used by the embryo to build up its own body. For this process, energy is needed. The energy that is needed is stored inside an egg at start of incubation. During development, the embryo uses mainly the protein (from albumen and yolk) for building up the body tissues, and gets the energy needed for that process mainly from burning the yolk fat. During this process, the embryo consumes oxygen and produces water, carbon dioxide and heat. When the body is build up and the embryo is ready to hatch, a fraction of the yolk remains unused and can be found in the new born chick as residual yolk. The logical consequence of this is, that a chick with more residual yolk at hatch used relatively less nutrients for growth and development. The question can be raised: would it be better for the embryo to utilize more yolk, and as a consequence have less residual yolk sac. Or in other words: the less residual yolk the better? 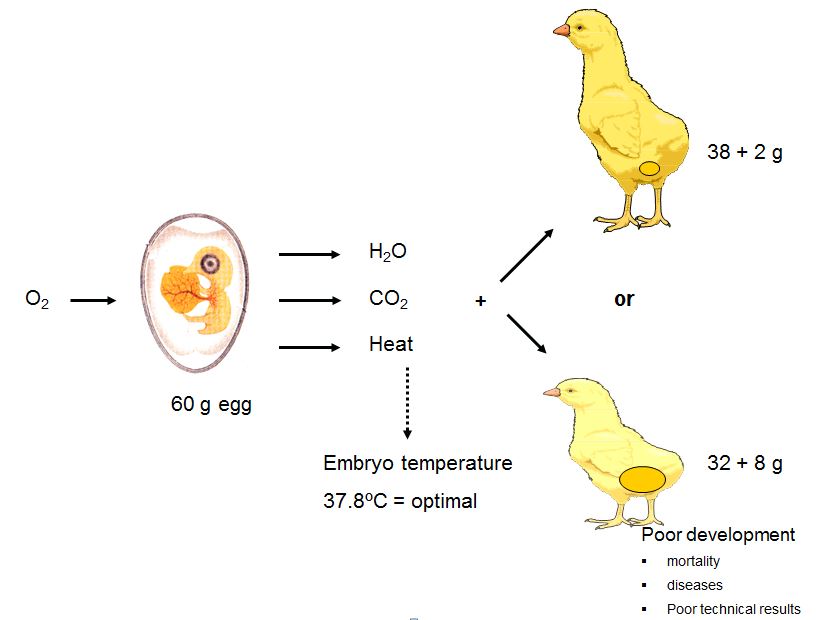 A fertile hatching egg comprises shell, yolk and albumen and a viable germ. During incubation the embryo develops its body from the contents of the egg, using energy obtained mainly by burning yolk fat. This process also produces waste products: carbon dioxide (CO2), water (H2O) and heat. To incubate successfully, environmental conditions have to be created that facilitate this process. At hatch, a certain amount of yolk is left unutilised in the yolk sac. The distribution of energy in major components of a developing chicken egg as a function of age is in Figure 2. Yolk and albumen are used to build up the body of the embryo. The proportional amounts of energy that are lost to the environment and that can be summarised as “burned”. The quantity of residual yolk however is not as constant as is shown in Figure 1. Some chicks are born with more residual yolk than others. It can be expected to find a lower yolk-free body weight in a chick that has a large residual yolk; this chick also burned less energy. 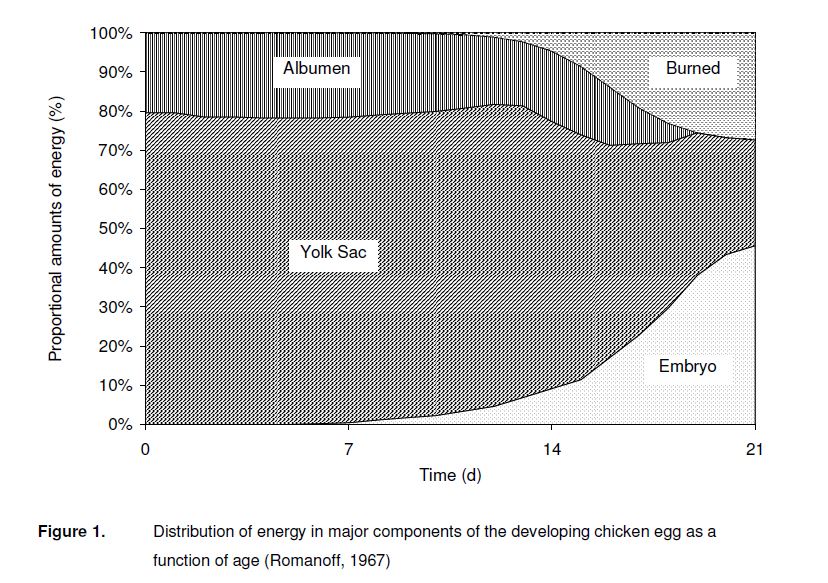 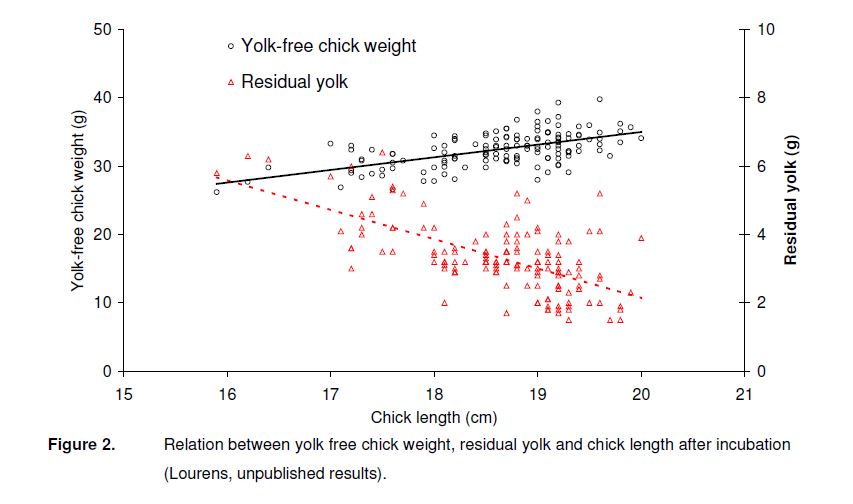 Factors that influence heat production positively, are increased egg size, increased oxygen pressure and increased air pressure. Large eggs contain more energy and should burn more yolk fat to build up a larger embryo compared to small eggs. Sufficient heat removal is required to maintain embryo temperature within the optimal temperature zone for development. Already after 12-14 days of incubation, oxygen uptake limits embryo metabolism. Increasing air pressure will increase oxygen uptake, but also decrease the release of carbon dioxide. Increasing air pressure during incubation increases metabolism; at least when insufficient oxygen uptake limits metabolism more than high carbon dioxide levels inside the egg. Using higher O2 levels, it is possible to get a higher HP during incubation. However, a higher O2 concentration will result in a higher yolk utilisation rate and higher HP, but this does NOT result in a higher yolk-free body weight! A higher HP does not mean that chick quality will be improved, this can be clearly seen in the following graph: 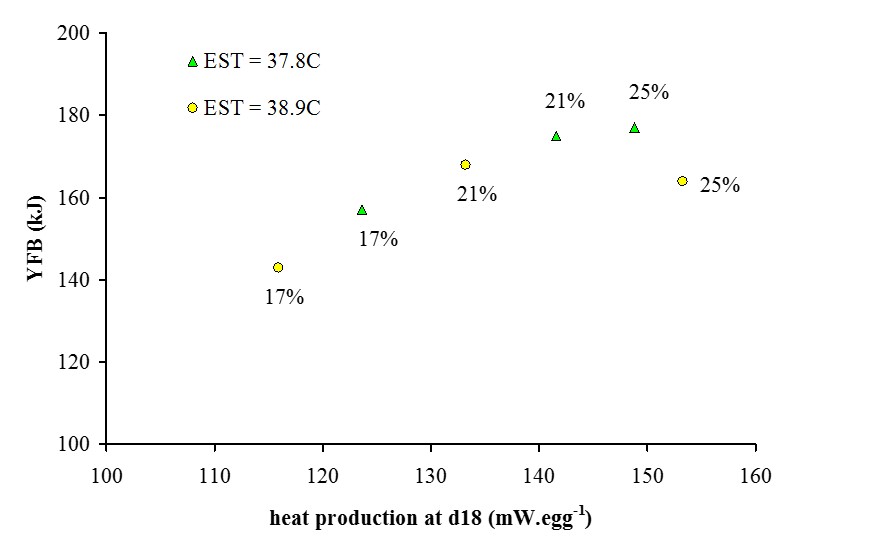 The less residual yolk the better?

Embryos with large residual yolks at hatch did not efficiently use their energy to gain a high yolk-free body weight. Embryos with large residual yolks produced less waste products a consequence. For optimum development, a high metabolic rate is required, that can be measured from high heat production. Because heat production directly influences embryo temperature, the transport of heat from the egg to the environment should be sufficiently. Chick length measurements provide very informative data on the quality of the incubation process and is positively related to yolk-free body weight and negatively related to residual yolk weight. Longer chicks consumed more energy, produced more heat, are in a further stage of development, have better gut health, a more advanced immune system, are more yellow beacause yolk pigments moved to the feathers. So life is better with less residual yolk!

Below are results shown from an experiment at the PRC in Edmonton, where eggs were incubated at different temperatures. In the treatment where eggs were incubated at 37.8C, embryonic blood showed to kill off E-coli bacteria better than at at all other treatments. Remarkably, the well developed embryos were better able to distinguish between pathogenic and unharmful particles. This E-coli killing rate test was developed by Millet et al. (2007) and can be used to show how well the innate immune system of young chicks is developed. This paper and an interesting paper about how breeder age affects the E-coli killing rate capacity is listed in the section Paper of the week 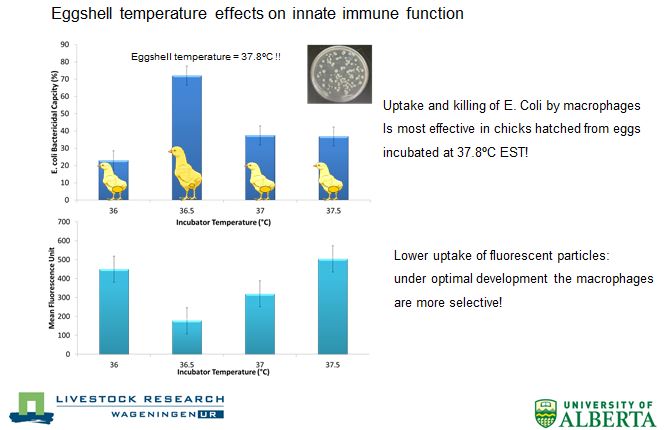 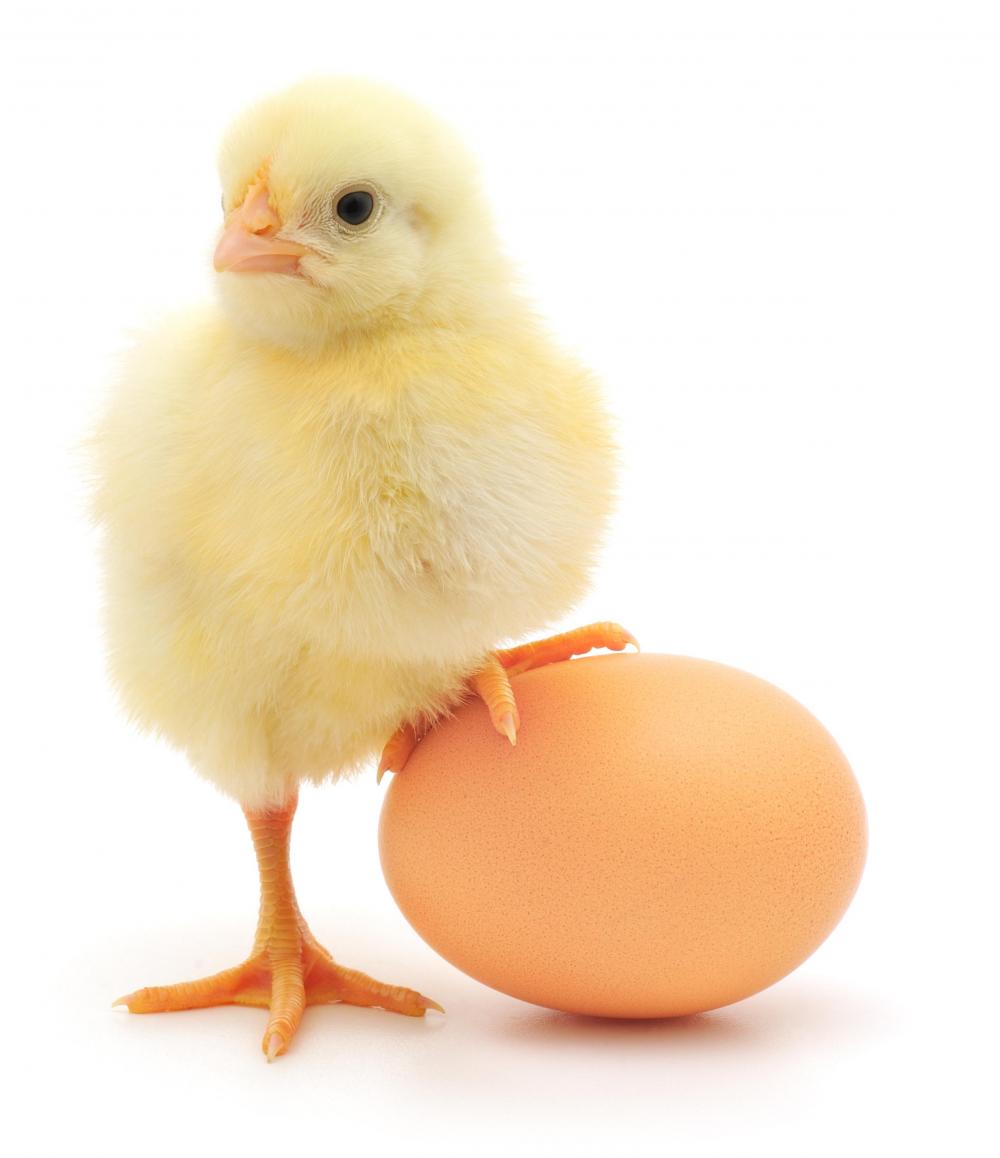